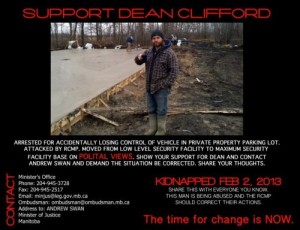 I bring to your immediate attention the abuse of power and perversion of procedure a freeman Dean Clifford is being subjected to in a prison for which you are responsible. You may or may not be aware of the situation; it may even be due to your own orders. If not however, then I am sure you will find the situation as shocking and offensive to the conscience as do we who express our displeasure to you.

Tens if not hundreds of thousands of people around the globe are observing what is happening to Dean Clifford in your sphere of responsibility. I myself am following events from Germany as are many others. Canada has a very good image over here as a land of peace, freedom and justice. You are destroying this international image by treating Canadians like Dean Clifford with open injustice and political despotism.

I am sure you would agree that it would deeply offend and shock the public conscience worldwide to hear that a Canadian was imprisoned for no other reason then his political beliefs, regardless of how inconvenienced those in power were by those beliefs. This is especially true if said beliefs are based upon love, compassion, truth, and exercised in a lawful and peaceful manner. And although Dean is not charged with having certain political beliefs, it does appear he was targeted for them, and then assaulted and arrested by an RCMP Officer. The entire incident itself will likely not withstand proper scrutiny, and would likely reveal an over zealous officer.

Now Dean has been in prison since Saturday night, and during this time there has been no indication from him that he is a threat to others or staff, or a flight risk. He has been held in Winnipeg Remand Centre and was in good spirits, sure he would be released according to due process and proper procedure.

On your own organizations website I found the following:

Maximum security institutions provide long-term incarceration for offenders who have a higher probability of attempting to escape and who present a greater threat to the safety of the public.

Dean is in no way a threat to the public, nor a flight risk at all. To the contrary he is looking forward to his day in court. His being transferred to a maximum security prison is nothing less than an unlawful and inappropriate punishment for his beliefs. When asked why he was being transferred, one of the staff apparently let it slip it was due to him being deemed a threat to the staff and prisoners FOR HIS POLITICAL BELIEFS.

If someone’s political beliefs are justification for transferring them from a minimum security facility to a maximum security prison, then those same beliefs must justify transferring someone from non-incarceration to imprisonment. I always thought, in Canada beliefs which are unpopular to those who claim authority are no reason to imprison someone nor are they reason to deny them due process when in the jail system on other matters. This is especially true when there is sufficient reason to believe he was targeted, assaulted and then arrested ostensibly for some driving infraction, but more likely for his political beliefs, which he is quite vocal about. But again, as this is supposed to be Canada, those who wear uniforms on the public’s dime, and who do not like the beliefs of other Canadians, can suck it up, as they have no right to abuse their office to punish those who question the source, nature and limits of their authority.

Dean Clifford was transferred to a maximum security facility, for no other reason then some mid level bureaucrat within the system does not like his political beliefs and decided to exercise their authority without just cause and have thus placed him in greater danger. Likely they did not like his jovial and fearless attitude, and in spite of the fact that he is both peaceful and not a flight risk, decided to abuse their authority and position. It stinks to high heaven with abuse of power, and needs immediate attention and rectification.

As you have now been served notice of what is happening within your prison system to one of our brothers, and the injustice and abuse brought to your attention, and you have the power with a simple phone call to rectify this situation, the responsibility is clearly yours to address the situation, return him to minimum security as justified by his actions and the charges, and ensure that those who decided to take it upon themselves to punish him for his beliefs are themselves held accountable and face proper and meaningful sanctions.

This is Canada, where people are supposed to not be imprisoned lightly or easily for their political beliefs. People who claim that someone’s political beliefs are a threat to the safety of others, and therefore imprisoning them is justified, are in fact the ones demonstrating the most dangerous political belief imaginable.

You may not like the freemen’s political beliefs, as they hold that people in the government should be accountable and all operations transparent. But that is no reason to imprison them nor seek to punish them further if they are in your prisons, especially when it is entirely possible that the original charge is one manufactured by a politically motivated police officer seeking to use his office to hinder lawful political action.

Freemen around the globe believe in good-government. This is your chance to show some, Mr. Swan.

Thank you for your time, I trust you will take the appropriate and honourable steps.
Sincerely, and without malice aforethought, ill will, vexation or frivolity,